It all started out when I was scrolling through youtube and found a Punch-Out!! Wii gameplay (something about the models and corniness was funny), but it slowly turned into a sincere admiration for combat sports and the human body in motion. I'm still getting into some more anatomical drawings, but as it is for now, these characters are like an outlet for me to express that love. They're pretty versatile for whenever I think of a funny comic idea, though. 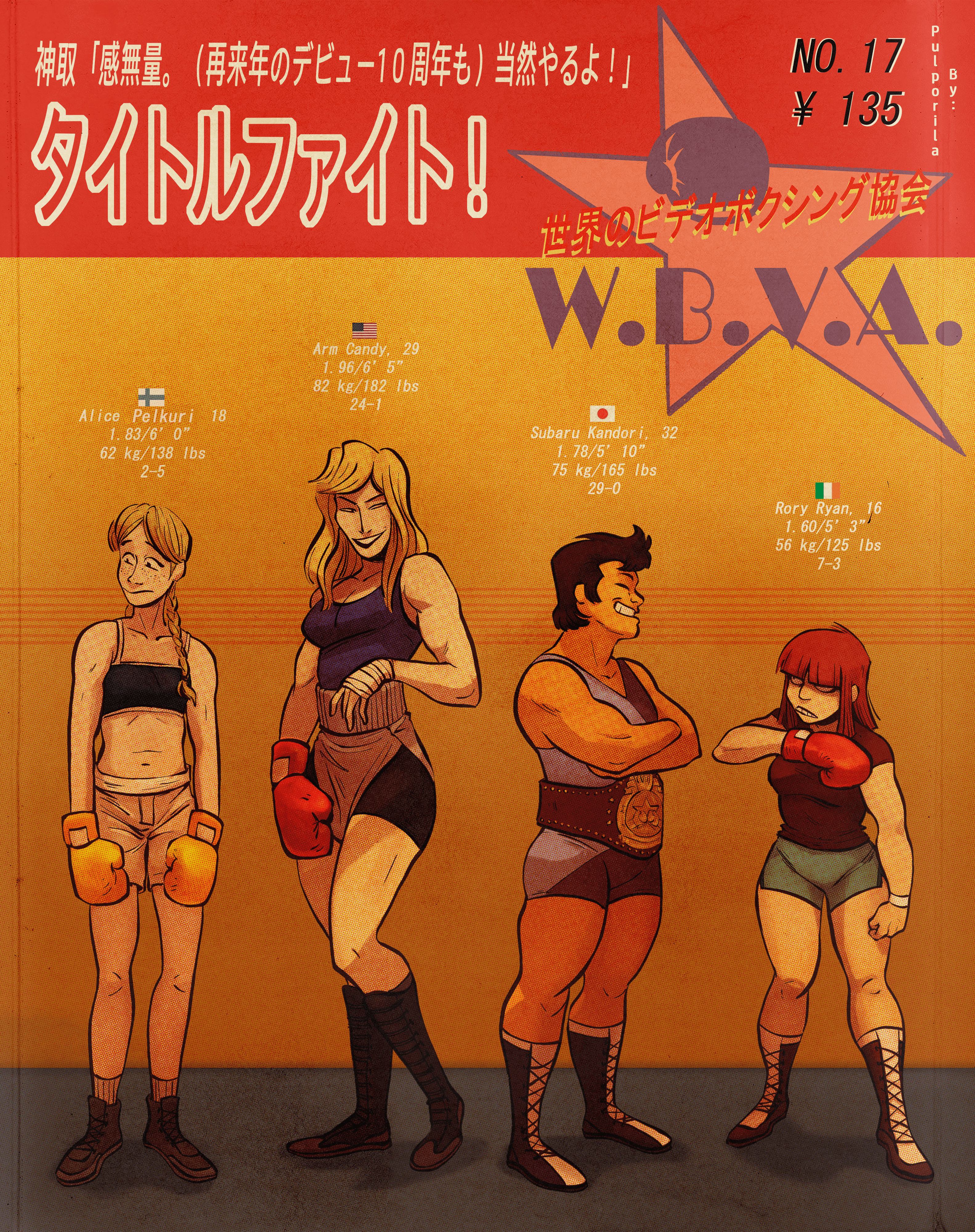 "After spending months on programming the perfect artificial coach, Alice had completely neglected the physical training itself. It's a (painful) work in progress, as her only remarkable qualities are her height and intelligence."

She's based off one of Punch-Out's Arm wrestling rival, Alice & Ape III, but instead revamped into a lanky finnish nerd (formerly belgian until I couldn't think of many stereotypes). She constantly falls in love with the nearest american boy who has the slightest bit of attitude, and got her latest patent stolen thanks to an incompetent attorney and poor financial choices. Most definitely laughs like Betty la fea.

Relationships: Alice has an unrequired crush on Disco Kid, but she's too oblivious to realize he's not into ladies at all. Her only true "friend" is Rory, who treats her like a punching bag and rewards her with a new Tamagotchi every six months. She recieved lessons from Von Kaiser for a while, but it was mainly because her robo-coach was still in testing at the time. They have a good teacher-student relationship, but Alice regrets not being a hardened german engine like him.

"As the name suggests, Arm Candy used to be a well-known ring girl in the WVBA, until ultimately getting dumped by a boxer. However, she would manage to reach World Circuit in just a matter of three years, sacrificing her all positive reputation to be the headcase that she is nowadays."

Yet again, taking an NPC from the Arm Wrestling game. I'm basing her off Vonda Ward and the typical american trophy girl, who just so happens to be brawny and a sociopath. She's pretty legally savvy from her past desk job, but those 'mellow short-haired clerk with glasses' days are over. Her hobbies include crippling people, being jealous, bullying shorties, and hanging out with with her equally diva pals at her 70's themed apartment.

Relationships: Karina's generally disliked by everyone, but the closest thing to a friendship she's been able to get is with Super Macho Man. Sometimes they pay for the expenses of the other if there's something in it for them, though they still act like sour old ladies bickering in a Florida retirement home. She has a history of strangling Aran Ryan, either consensually or not, and currently can't stand the sight of him. Subaru's tried to get along with her, but Karina believes that's just a way to mock her for her only defeat against her. Meanwhile, she has the urge to crush Rory every time the latter thinks she's hot stuff for cheating.

"Once a judoka and now the champion of the World Circuit, Kandori's jolly attitude is off-putting to many, and relieving to a few. Though it's well known that she has no preference when it comes to size or sex: every oponent is a step closer to becoming Japan's strongest woman."

I'm particularly fond of ladies who look like dudes, so the Shinobu Kandori inspo had to be kept in. She gets to sucker punch everyone in the ring with the same attitude of playing tag, but the business behind the sport is still a serious matter to her, so she'll turn down any unchallenging exhibition fight or crappy international deals. Being your own manager has it's perks.

Relationships: Unlike Karina, Subaru has no beef with anyone past tansient distrust from the other end. She's very detached from people to the point of being unknowingly insensitive, but she's always there to give the younger fellas pep talk and training during her spare time. She doesn't seem too concerned about her solitude thanks to her near-obsession with martial arts and self-improvement.

"Succumbing to the mainstream competitiveness, Rory chose to box despite having practiced collar and elbow back in her homeland. That's why her fights are prone to irish leglocks and uncalled kicks to the face, if she's in a particularly bad mood."

The first girl I came up with thanks to an askblog I started out in 2021 (only that she's a wee lass in that 'timeline'. It's kind of a mess), so she's the most developed. Spending all day with Father Jack Hackett for a mother has turned her into a repressed lass yearning for fresh meat. Her brother 'helps' her train by letting her take all the hits until she learns something, and that has only taught her to make friendships through senseless grappling. It hasn't been a successful operation so far.

Relationships: Rory's hostile towards any athlete larger than her due to the positive reinforcement she gets from Aran whenever she's reckless, although he doesn't take her boxing ambitions seriously since she's still his little sister. Otherwise, she's like any brusque teen with a liking to mess with docile people like Alice or Little Mac. She's hopelessly crushing on Don Flamenco, though she's much romantically reserved than Alice. Her favorite boxer is Masked Muscle just because he can get away with spitting poison at people's faces. And much like her brother, she's terrified of her mother.

And in honor of the Art-cade spirit, feel free to take into consideration these genderbends (and Carmen mi amor) as well! All hail Glass Joanne and butchy bored doodles.